JEWEL OF THE SOUTH-WEST

There are a two new mine tenements lodged over the entire town of Quinninup and surrounds…
Yes everyone's homes, farms and businesses will be covered by a mine tenement unless you object now!

There are a two new mine tenements lodged over the entire town of Quinninup and surrounds…
Yes everyone's homes, farms and businesses will be covered by a mine tenement unless you object now! YOUR COMMUNITY NEEDS YOU!

All the great things that happen in Quinninup are mostly the result of a few hard working committee members of the QCA.
Some of these committee members have held positions for many, many years!!
However, some wish to hand over the reigns of their committee positions to a new nominee.

The small township of Quinninup is nestled amongst the giant ancient Karri forests of the Southern Forests region. 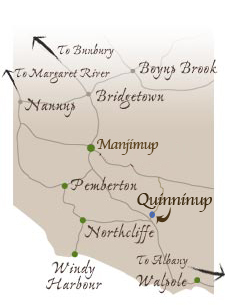 The forest and bush land surrounding Quinninup offers a unique variety of flora and fauna and rare orchids only found in the forests of the South-West of Western Australia.

A short 25 minute drive south of Manjimup or east of Pemberton, Quinninup is situated along the historic stock route to the coast…at the corner of Wheatley Coast Road and the South-West Highway.

History of township and area

The Quinninup Fair, arts and drama groups plus other events

Things to see and do

The South West is synonymous with the wilderness, giant forests and rare flora and fauna.

Quinninup in the Southern Forests

Quinninup, in the local Aboriginal language, means the "place of Zamia Palm" and was first settled in 1924 as part of the Group Settlement Scheme to assist migrants seeking a new life after World War One.

During this early period, many families started farming various fruit and vegetables, grazing cattle and sheep as well as poultry and pigs….for a short period even growing and drying of tobacco was a thriving industry.

The excellent soils of the region combined with the high rainfall, moderate summers and cool winters has helped make the Southern Forests region today’s “food bowl” for Western Australia.

Many of the original settler families are still farming today with the next generations following in their forefathers foot-steps. We are also seeing growth in new sectors including tourism, wine, marron and black truffles.

Our Environment Our History
Label Text

Quinninup in the Southern Forests

The people, who came and are still coming to settle in Quinninup, Karri Lake Estate and her surrounds come because of the beautiful forests, the perfect climate and the love of nature.

The original task of the Quinninup Community Association was to prevent logging in the areas near the township off Wheatley Coast Road, to this end numerous submissions were presented and in 1992 Nature Walk Trails were established and in 1994 our Eco Tourism module was put in place.

A 9 year moratorium was given on future logging, which, as good fortune would have it, brought it right up to the time that the area was declared a National Park.

The QCA has a number of successful events including the annual Quinninup Fair as well as 'pop-up' cafè and other funding raising events.

Annual membership is only $15 for singles and $20 for families.

Membership is open to residents or landholders within Quinninup and surrounds. ~ ABC NEWS WA ~
Silicosis a deadly disease caused by silica dust inhalation is on the rise. ~ CHANNEL 9 NEWS ~
Quinninup, a tiny south west town is under threat by a potential silica mine on its doorstep.

JEWEL OF THE SOUTH-WEST STOP THE MINE
Make a Donation

The Quinninup Community Association acknowledges the Aboriginal and Torres Strait Islander People as the original custodians of this country, recognizing their connection to land, waters and community. We respect their cultures and Elders, past and present.

We acknowledge Pibelman Noongar people as the original custodians of the land on which we live.